Jaw dropping. Breath taking. Awe inspiring. These are just a few of the words used to describe the annual holiday decorations at the Bellagio Conservatory. And 2013 is no different. The good news is that you have until January 5, 2014, to see the display which features thousands upon thousands of flowers, trees, and other decorations for the Las Vegas Holiday Landscaping and Christmas season.

Landscaping in Las Vegas for the holidays

The centerpiece of the display at the Bellagio Resort on the Las Vegas Strip is Las Vegas’ largest indoor holiday tree standing at 45-feet tall and weighing 8,000 pounds, hand-picked in Mt. Shasta, Calif. and flown in for the display. More than 7,000 LED lights sparkle and 2, 500 ornaments accent the tree, a majestic white fir.

And viewers are encouraged to sneak a romantic kiss with that special someone under the mistletoe inside a life-sized snow globe surrounded by water arches and four drumming soldiers. Live marimba and vibraphone performers play nightly, filling the Conservatory with the sounds of the season. Also a highlight istThe full-scale chocolate house created by Bellagio’s pastry team was created from 1,600 pounds of chocolate. 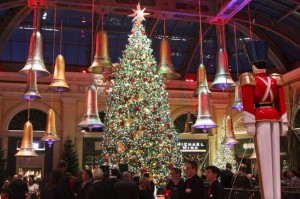 From Bellagio.com: “A holiday favorite returns with a family of topiary polar bears adorned with 18,000 snow white carnations. Momma bear will watch over her two cubs as they frolic through the poinsettias and float on an icy pond. In an effort to build awareness about protecting the polar bear’s home, Bellagio will partner with Coca-Cola to promote the World Wildlife Fund (WWF) during this year’s exhibit. Coca-Cola’s goal, in partnership with WWF, is to raise awareness and funds to help create places where polar bears and people can thrive in the Arctic. With the help of generous donors, more than $3.1 million has been raised to support Artic research, conservation efforts and WWF’s work with local communities. To help continue these efforts, go to ArcticHome.com, donate to WWF and Coca-Cola will match, up to $1 million through 2/15/2014.”

We here at Desert Springs Landscaping applaud the Bellagio and the other homes and businesses that embrace the holiday spirit. We wish you the best in 2014 and are here to answer any Las Vegas landscaping questions or to help create your own backyard or front yard paradise. Because some people have described our work as “breathtaking” as well … Send me a personal email and we can get started at rob@desertspringslandscapingllc.com. Or call us at 702.436.8080.